Elementary, My Dear Songwriter
Good songwriting revolves around the structure of the song. My definition of structure is the way the various elements and pieces of the song fit together in a logical as well as artistic manner. For rock and pop—my primary songwriting genres—there are some standards that you usually work within (the logical part) in order to achieve that familiar aspect that makes a song memorable. In addition to utilizing standards, you also want to employ some artistic nuances to make your song different and interesting so that it stands out and isn’t too predictable.

It’s The Blues, Baby
All of rock and pop music has its roots in the basic chord progression of “blues” music. The power of the blues form is it is a simple, universal structure. How you build upon these basics is what will make a song unique. 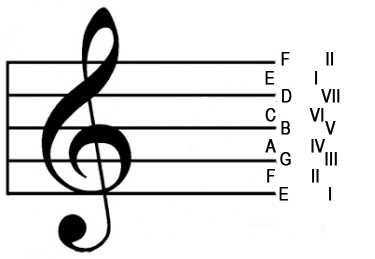 Charting
In order to understand structure, it is useful to use a process known as “charting”. When you chart a song, you replace the chords or notes with numbers based upon the key or root chord being number 1. Then you count up from there to find the next chord. When I was taught to chart songs, my instructors used Roman numerals, primarily because once you got used to this technique, it was less confusing when you started adding chord variations like 7ths, flat-9s, etc.  In the example to the left, we show the key of E and the chord numbers to the right of the notes on the staff.

The standard 12-bar blues guitar progression charted out looks like this (with each bar counted as one measure):

The last measure is called the turn-around because it leads back to starting the progression over again and a standard way to do this is to play the V chord with the 7th added for the last two beats. So applying this to the real world, let’s add the chords in for the key of E major:

Learn The Basics; Jam With Anyone
So once you memorize this progression numerically it makes blues jamming a lot of fun since it doesn’t matter what key you want to play, it is the same numeric structure. If you’re at an open stage blues jam and someone says, “This one’s in G” then all you do is replace the chords above with G/C/D. Then it is up to you to add your personality and creativity to bring the song to life.

I Wanna Rock
But what if you’re not feeling blue and you just want to rock? Well the primary chord structure for rock and roll is the I / IV / V pattern. Rock is generally not as structured as the 12-bar blues progression but if you chart out your favorite songs you will almost always find some combination of the I / IV / V chords. The main reason is that this interval is natural and pleasing to the ear. In contrast, there are many times when a songwriter abandons structure and just lets it flow and meander because that is the direction they want to go. There is nothing wrong with this alternative approach as all music is expression. However, you will notice that these types of songs aren’t the cuts from the album that get played on the radio.

Now that I have introduced the basics of song charting and the blues structure, in my next blog I will go over how we start applying that to a pop or rock song with vocals.