In a previous blog post, we discussed the foundational tracks of a song. In today’s blog, we share a window into the interior design of the song, the vocal tracks.

Building upon the Foundation

Because Eclectic Verve is not a full band in the traditional sense of the word (The only full-time members are Kent and Cindy), to create our albums we must build the songs in stages. Once the drums, bass, guitars and MIDI instrumentation are completed, then it is time to record vocals. At first glance this may seem to be the easy part. After all, how long can it take to sing and record a 2-1/2 minute song? The answer is anywhere from 3-5 hours!

The voice can be complicated in that it is not only an instrument but a muscle. It needs to be warmed up and constantly practiced to keep it in tune and good shape. Since every voice is unique, careful consideration must be taken when recording vocals, such as which microphone sounds best and compliments the vocal tonality and style of music. It is amazing the difference a condenser versus a diaphragm microphone can make on the same voice. Just because a $5000 mic is an incredible microphone doesn’t mean it will sound better than a $100 SM58 if the voice and style fit. It all depends on the ears and personal taste much of the time.

Mechanics of Singing to Record

Once the microphone is selected, then the preamp settings are dialed in (this sets the incoming level of the mic signal as well as any EQ adjustments to get the tone the engineer wants), and we start singing the song. After a few practice takes to warm up and make sure all levels are right, we then record 2-3 takes. Depending on the song, it may be sung from beginning to end or it may be divided into singing the verses first and then the choruses, or even just a phrase at a time.

In some areas of the song where a fuller sound is desired like in the chorus of “Maitland’s Meadow” or “Wiegenlied”, vocals may be “stacked” where the same phrase and melody is sung 2 or 3 times onto different tracks and then blended together. While modern recording makes it easy to simply copy 1 take and paste it multiple times to different tracks, actually re-recording it makes it sound bigger because the human voice never repeats itself exactly the same way. So the variations create a natural modulation or “chorusing” effect that is warm and less mechanical.[break][break] Stacking tracks can also take time since the vocalist needs to match the exact cadence of the first take to make the track sound full but not muddied. In “Wiegenlied” the vocal is a three part harmony with Cindy singing the high and middle while Kent is singing the low. Each part was tracked twice for a total of six tracks. Even though there are only four phrases, doing all of the steps outlined above as well as the last step defined below took 5 hours!

The final step in recording vocals is primarily an engineering one. Tuning is important especially in songs like the ones on I Wanna, Iguana! that are fairly open and vocal-centric. No matter how hard you practice, holding exact tone and maintaining proper intervals is very difficult. Maybe some gifted and professional singers can skip this step but our engineer had not run into any yet in his career! A lot of times it is simply nudging a note here and there closer to the center of the pitch. This is an art and science as too much manipulation and too much perfection sounds robotic and unnatural. Also during tuning, timing of certain notes may be adjusted to nudge sections that may have been pushed a little ahead or maybe are lagging behind the beat.[break][break] The process of recording vocal tracks can be exhausting even for a 2-1/2 minute song. However, we are very pleased with the result of our efforts and think that our fans will be as well. 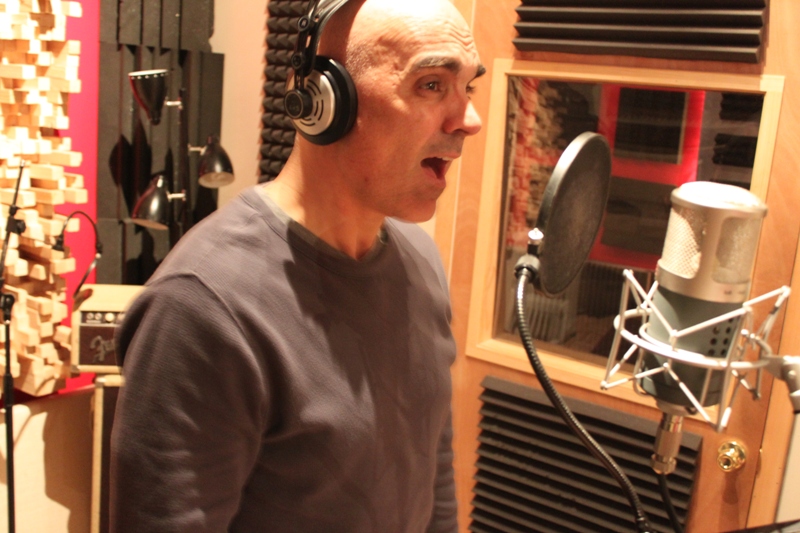