Following is the sixth blog in Kent’s twelve-part series to share with you what influenced him to write each song on our debut CD Something on the Way. A subset of the lyrics to “Am I Crazy?” is in italics below. The full lyrics are available under the Music tab, Lyrics category, by song title.

In contrast to most of the songs on our debut CD, this song had a long incubation period. It took nearly three years from the time song ideas started coming to me until I was able to bring the song together in its final form. I finished writing this song right before we started mixing. Initially I thought the components of this song were two different songs. I tried to create two songs with my disparate ideas, but neither song progressed to completion until I combined them into one song.

The two song starts that became the song “Am I Crazy” are: 1) the simple lead in with the verse, and 2) the chorus progression. Changing the key of either of the song starts to match the other song start did not resonate with me because it seemed to change the mood away from my original intent. I liked how the two parts countered each other. The challenge was to blend the two different keys (C# major for the verse and E major for the chorus) together into one cohesive song. Although the two keys are somewhat related (with a LOT of sharps!), C# needs to be minor to fit with E major. Listen carefully to see if you can hear the slight tonal difference between the start of the verse (C# major) and the start of the chorus (C# minor). In the transition and outtro progressions (which are in E major) there is a B chord, which fits nicely with E major, but not with C# so in the verse it is a Bb. This dynamic created several slight tonic shifts that were particularly challenging vocally as most of the notes in the scale were the same but a few primary notes have to shift a half step depending on if you are in the verse or in the chorus key. I eventually came up with a short transition section by strumming the E and B chords and adding the E-Bow effect to create a haunting build up to the chorus. The double guitar solo was also a lot of fun to craft with the guitars weaving different melodies layered with delays.

Not Your Typical Love Song

“Am I Crazy?” may be a strange title for a love song, but that was my intent. Lyrically this song is about soul mates being physically separated yet still connected spiritually. The most important theme is that we are never really separated from a soul mate. The first verse deals with physical separation. I used the idea of looking up at the moon and realizing that the other person may be thousands of miles away yet he/she may also be looking at the same moon at the same time. The theme carries over into the second verse as the narrator switches to the other person and Cindy takes over the vocals:

It may not show, reflected in her eyes
Looking up at the same moonrise.
If you go, tell him in the night
I find my solace in the same moonlight.

I expounded upon the theme of physical separation / spiritual connection at the end of the second verse. I presented the idea that a loved one may no longer be living, thus is unable to speak directly to us, but can still demonstrate their presence by manipulating the air around us:

It may not show, or vocalize
But the soft breeze he’ll recognize.

The chorus asks the question “Am I Crazy?” for being so enraptured with someone I cannot be with physically? And in the next breath, the chorus answers the query with “No, I’m not crazy after all.” This answer is the response of anyone who has been lucky enough to meet a soul mate. You understand how deeply connected you are with that one person.

Am I crazy to be caught within your thrall?
I toss and turn all night before you call
I need you like a harbor in a squall
No I’m not crazy after all.

The outtro was a separate chord progression that our guest bass player Carl and I played around with for the E-Bow transition. It did not really fit leading into the chorus but I liked it so much that I placed it at the end of the song and repeated it several times to fade it out. Originally I was going to fade the song out with the softer “It’s the little things you do” line. However, building it back up to the other progression inspired new words and melodies. This worked great to feed back into my theme of soul mates as the conclusion of the song alludes to love that extends beyond the present to encompass multiple lifetimes together.

Yeah you, it was you all along on and on
Across time, across years, over eons to appear
After all. 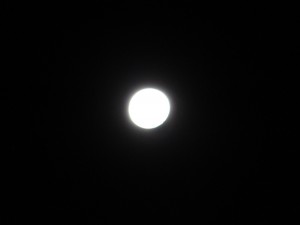